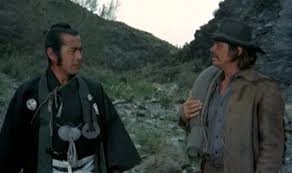 Clockwise from top left: James Cagney doing judo in Blood on the Sun (1945), Sean Connery as James Bond receiving ninja training in You Only Live Twice (1967), Toshiro Mifune and Charles Bronson in Red Sun (1971), and Ken Takakura in The Yakuza (1974)

I just wrapped up teaching a four-part intro to aikido program at my home dojo, the Chicago Aikido Club. It was a pilot for an idea to teach simple-stripped down classes (no uniforms, casual atmosphere, eschewing some of the traditional etiquette), introducing newcomers to the ideas of breathing, relaxing and centering using basic aikido exercises and self-defense principles. The response from attendees was overwhelmingly positive, and I'm hoping there might be interest in holding the program at schools, community organizations or even corporations in future.

The attendees had a lot of questions about the whys and hows of aikido, which got me thinking about how aikido and Japanese martial arts in general are portrayed in U.S. popular culture. As a side project, I started putting together a video highlighting the technical and aesthetic distinctions of Japanese martial arts (as opposed to Chinese martial arts, for example), using clips from American-made movies portraying Japanese fighting styles.

This actually turned out to be more difficult than I had expected. Although Japanese martial arts were the first Asian fighting styles to get popular exposure in the U.S. (President Theodore Roosevelt was an enthusiastic proponent of judo, and interest spiked after the Pacific War and the postwar occupation of Japan thanks to returning soldiers who had studied judo, karate and aikido while serving), in terms of onscreen portrayals Chinese martial arts are far more prevalent. Bruce Lee is a big factor, first with the 1966 "Green Hornet" TV series and then his popular Hong Kong movies, culminating in the classic U.S.-coproduction Enter the Dragon (1973). Lee of course helped kick-off massive interest in kung-fu stateside, resulting in 70s-era Hong Kong films becoming a staple of drive-ins and grindhouse showings, the TV series "Kung Fu"  starring David Carradine, and kung-fu being incorporated into homegrown product such as the Blaxploitation films of the era.

Things seemed to die down a bit kung-fu wise during the 1980s, but then revved up again in the 1990s thanks to the Hong Kong films of Jet Li and Jackie Chan gaining a massive cult following in the U.S. which led to both of them making movies for Hollywood. Then of course there was the one-two punch of The Matrix (1999) and Crouching Tiger, Hidden Dragon (2000), both choreographed by Yuen Woo-Ping, and the rest is history. Since then, everyone from the stars of Charlie's Angels (2000) to  Marvel Comics superheroes have kicked and flipped their way onscreen.

Japanese martial arts, on the other hand, have seen comparatively little screentime, and when they have, more often than not it hasn't been very good or not very accurate. Kill Bill: Vol. 1 (2003) and The Wolverine (2013) are both set partially in Japan and feature Japanese fighters, but the choreography resembles the acrobatic style of Hong Kong films (Kill Bill was also choreographed by Yuen Woo-Ping). Same goes for the titular Teenage Mutant Ninja Turtles (1990) in their original big-screen debut, co-produced by Hong Kong film company Golden Harvest. As for the general spate of ninja-themed movies that came out during the 1980s (like American Ninja and its sequels), all of them were low-budget B-films destined for the late-night cable and video store graveyard. I love the original Karate Kid (1984), but given it was choreographed by Tang Soo Do expert Pat E. Johnson, I'm not sure how true to life is the karate portrayed. And I'm simply not even going to bother discussing Tom Cruise's The Last Samurai (2003).

However, here are a handful of examples where American filmmakers actually did their homework and showcased Japanese martial arts with a reasonable degree of authenticity. The films themselves are not necessarily of the best quality (James Cagney's Blood on the Sun (1945) features a fight with an awful Yellowface villain for example). But they are interesting, and do provide an opportunity to observe in a dramatic context the physical and philosophical qualities that set apart Japan's fighting traditions from that of other countries.