Outside of acting, one of my other major pursuits is the martial art of Aikido.  I've been studying it since 1993; starting out as a member of a college club when I was studying at Waseda University in Tokyo as an exchange student.  I am presently training with a small club in Chicago's Uptown neighborhood (http://www.chicagoaikidoclub.com/) and am also teaching an 8-week summer program for a day camp run by the Jewish Council of Youth Services.  My first entry on the aikido club blog about the experience is now up and running.
http://chicagoaikidoclub.wordpress.com/2012/07/12/bringing-aiki-to-the-little-masses/


Bringing Aiki to the (Little) Masses 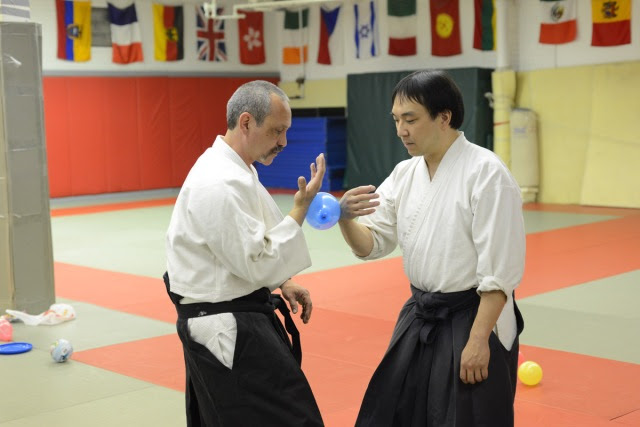 Chicago’s Lakeview neighborhood. I’m standing in front of 15 children ranging around ages 10 to 12, wide-eyed, excited, ready and raring to go. My face projects a friendly, optimistic smile (at least I hope it does), while my brain races to remember all of the ideas, exercises and plans that I had been poring over since April. I get a nod from my contact at the host organization. We’re schedule to start at 10:00am but things are running ahead of schedule, so it’s time to take the plunge at last. I open my mouth to speak: “So, who can tell me what they think of when they hear the words ‘martial arts’?”
I was quite surprised when the Chicago Aikido Club was first contacted about running summer aikido classes for the Jewish Council of Youth Services (JCYS). After all, we’re a relatively modest operation, and there’s a lot of bigger and more established aikido dojo in the area. However, Gene Lee, the JCYS staffer who gave me a call, was impressed by our website. Gene had been looking for something new for the JCYS’ summer day camp programming, and had brought up the idea of martial arts with his bosses. His own background included some tae kwon do training, but he was attracted to the idea of introducing aikido. Specifically, he liked the idea of introducing the kids to ukemi, aikido’s concept of cooperative training which is quite different from many other martial arts.
After first trading phone calls and e-mails with Gene in April 2012, I started chatting with club members and colleagues at other dojo about how to put together a kids program. I myself had never taught one, but several trusted friends had, and since I was going to end up being the primary instructor, I wanted to make sure I had as good a grip on things as I could.
From what I could gather, there were a couple of disadvantages with aikido in terms of teaching it to kids. First off, unlike karate or certain Chinese styles, it doesn’t have a repertoire of solo kata forms, which would certainly lend itself well to keeping groups of children occupied. I remember noted judoka Donn Draeger cynically mentioning in a Discovery Channel documentary that the appeal of kata is “the clock ticks by and the dollars roll in” (my paraphrasing).
Also, my more experienced aikido colleagues reminded me that you cannot teach aikido to children the same way you do with adults. I would be dealing with late elementary/junior high-level kids; kids whose focus is not always functioning at maximum. While there is a certain “sink or swim” aspects to adult aikido learning, it would be on the instructor to maintain the kid’s interest, not to mention keep them entertained.
Luckily, everyone I talked to had as many suggestions as they did warnings. I cannot praise enough Bill Cruz from Milwaukee, who simply had an arsenal of games and exercises gleaned from years of teaching aikido to kids. I already knew that I would have to hold back on teaching waza (techniques) for reasons of safety and liability. Bill introduced me to variations of tag, follow-the-leader, duck-duck-goose that incorporated everything from basic tenkan and irimi movement to demonstrating the foundations of centering and connection.
As it so happened, Day 1 turned out to be great for all. The kids turned out to be an exceptional group – attentive, enthusiastic and willing to learn. Added plus was the camp counselors all participated in the class as students (giving the kids a great visual example) as well as ran defense for me when discipline needed to be maintained.
What really surprised me was how easy it was to let the class develop its own thematic identity organically. I had stockpiled some ideas of what the theme of the 8-week program would be (including concentration, cooperation, maybe some basic self-defense). I had also been informed that bullying is a big issue for many of the kids and their parents, something I had a lot of experience with from my years doing social issues performances with Imagination Theater. Starting the kids out with some basic warm-ups and stretches, and moving to posture and practicing tenkan, it gradually became obvious what my targets would be: relaxation and awareness.
Of course, those two points are fundamental cornerstones familiar to any aikidoka, but watching how the kids responded to each exercise led me to believe that these two points would guide everything else. Relaxation, because it would be a way of communicating to the kids the idea that anger or aggression was not always the way to respond to a situation, whether it be frustration at themselves or towards another person. Awareness, because of both the issue of safety during training, but also awareness of how what you do affects another person (whether mental, physical or emotional).

I received some added assistance from Ian Miller and Andy Vitale, which led me to introduce the basics of forward rolling. On the point of awareness, I decided to make it clear to each of the kids that only they could decide whether they were ready or not to take a roll. I did not mind if one of them was afraid or felt hesitant, but I told them that if at the moment of truth they could not bring themselves to take the roll, they had to decide not to do it, and waste no time in moving on and to the back of the line (Of course, hoping they might decide differently the next time around). It turned out to be a great tactic, simultaneously keeping things moving along, but also reinforcing the idea that everyone was an active participant.
For an experience that I thought would top my shodan test for wracking my nerves, the JCYS summer kids program is shaping up to be quite a trip. I expect to learn a lot from these kids, and I wouldn’t have it any other way.
Dwight Sora, Chicago
July 12, 2012
Posted by Dwight Sora at 7:21 AM