"The only true wisdom is in knowing you know nothing." - Socrates 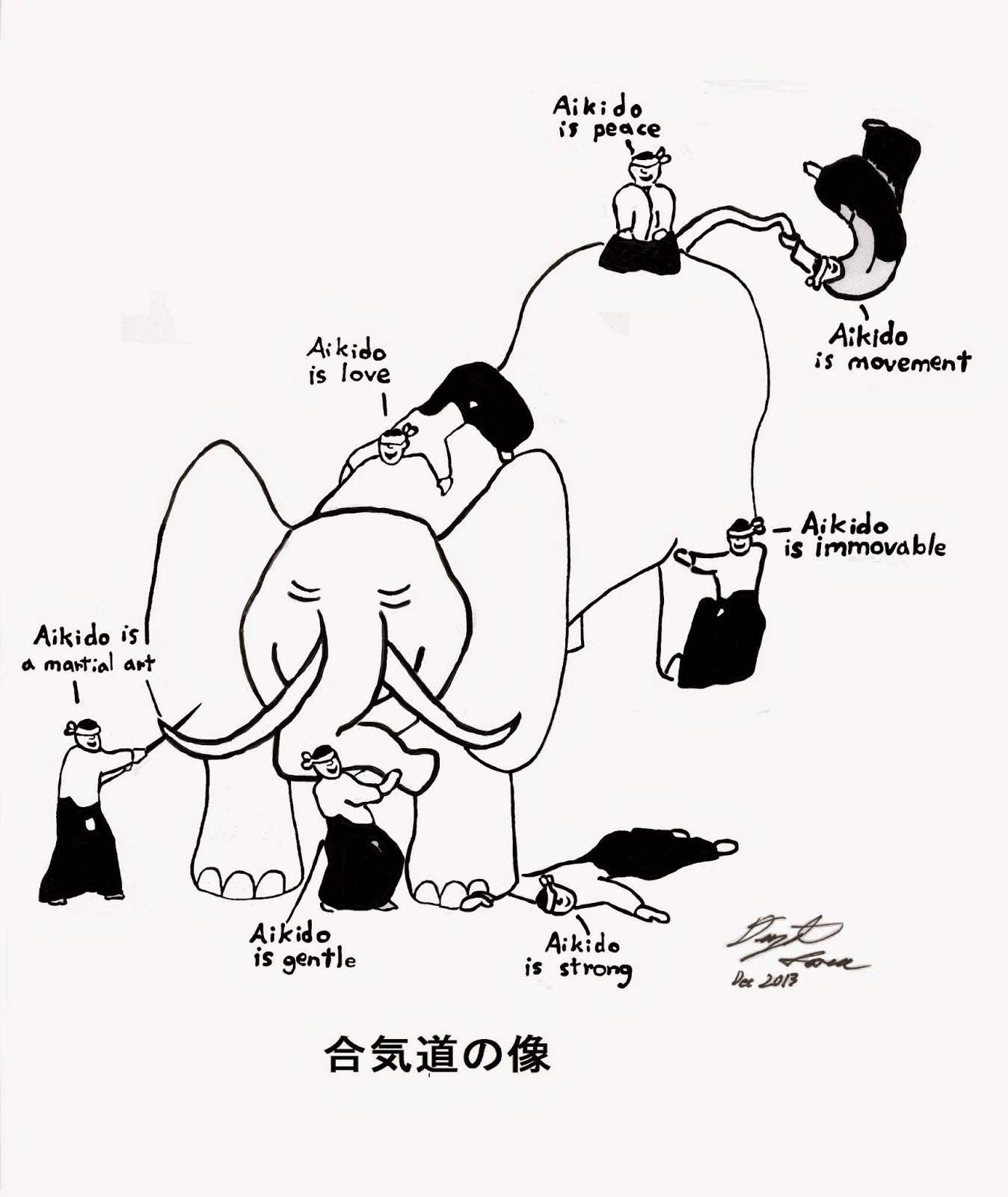 In the world of other life activities, I recently became the proud owner of my first copyright.  The backstory: last fall, I visited Kettle Moraine High School in Wales Wisconsin, partly to speak to performing arts students for a career day, and partly to teach at Aikido of Wales, an aikido dojo based at the school and run by Mike Weber.  During downtime, Mike and I spent some time discussing our individual histories of training and teaching in aikido, which gave me a lot of food for thought.  In the weeks that followed, I became occupied with a singular image about all the different instructors, schools and styles promoting aikido, whether strictly as a martial art, or as a mind-body discipline, or for its philosophical aspects.  It was based upon the Indian parable of the blind men and the elephant, in which a bunch of blind men who have no knowledge of elephants meet one for the first time, and through the limited contact each one has with a single part of the elephant (one man touches the trunk, another a leg, another the body, etc.), they each come away with different conclusions of what an elephant is (One says an elephant is like a tree trunk, another says it's like a snake, and so forth).

As a child I was quite fond of drawing, and use to doodle and sketch all the time.  I even had childhood ambitions of drawing comics, and at one point wrote a letter to D.C. comics and received a kind reply from the office of then-publisher Jenette Kahn.  However, I gradually lost interest and stopped long ago.  Now, for some reason inspired by the elephant image in my head, I began sketching out versions of it week after week.  Finally, in the middle of winter, I came up of with one that seemed to work for me.  It felt like it captured all of my own ruminations about the different schools of thought surrounding aikido, while also being very humorous.  I drew my "blind aikidoka" (aikidoka being the Japanese word for one who practices aikido) based on various photographs and drawings I had seen depicting aikido in action, while I gave the elephant a grinning face based on a miniature laughing Buddha statue I long had in my possession.

After showing the drawing to a few members of the Chicago Aikido Club where I train, I decided to print out the design on T-shirts.  The timing was good.  The Tohkon Judo Academy, where my dojo holds classes, was holding a fundraising campaign for new mats, and we wanted to contribute as best we could.  Assuming the T-shirt found an audience, I thought we could use it to raise funds, then sell it occasionally as a novelty item.  I won't say it took off like gangbusters, but the shirt has been pleasantly well-received among my fellow aikidoka, and we managed to sell a decent number since debuting the shirt on our dojo's blog.

In the middle of all this, it was recommended to me by a dojo member who is a lawyer that I really should get the image copyrighted.  Luckily, the process is pretty simple to do online these days, and I submitted an application one afternoon in January.  And then, four months later, it has finally arrived.

It's a tiny achievement, but nonetheless fun to see a simple idea evolve and come into being.

P.S.  The title of the image is Aikido no Zo (合気道の像), which is a play on words.  Japanese frequently features puns or jokes based on like-sounding words rendered using different characters.  In this case, I included the character zo (像) meaning "image or portrait" in the title.  So literally, the title could be "A Portrait of Aikido."  However, zo written with another character (象) means "elephant."