On Tuesday, the wife and I watched the second season premiere of Marvel's Agents of S.H.I.E.L.D. TV series on ABC. The episode began with a World War II flashback featuring Agent Peggy Carter of the Strategic Scientific Reserve (the predecessor to S.H.I.E.L.D.) accompanied by Captain America's compatriots the Howling Commandos, represented by Dum Dum Dugan and Jim Morita.

Out of curiosity, I looked up further details on the Jim Morita character, played onscreen by Kenneth Choi (who coincidentally is also from the Chicago area and appeared in the Red Dawn remake I worked on, though we shared no scenes). To my surprise, I discovered here that Morita did actually originate from the classic Marvel Comic books, and even headed up his own group called the Nisei Squadron. 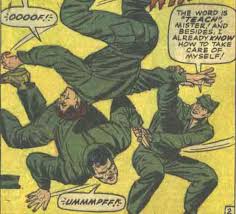 Jim Morita as he appeared in Marvel comics

Jim Morita as played by Kenneth Choi in Captain America: The First Avenger