The Story of Chiune Sugihara 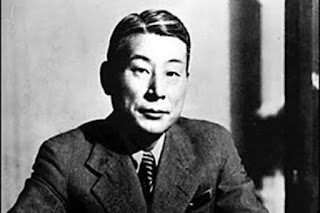 Back in August I was in a staged reading of Chiune Sugihara: Unsung Hero of the Holocaust, a short play by Philip Pinkus, portraying the WWII era Vice-Consul for Japan in Lithuania who helped more than six thousand Jews escape the Holocaust. It turned out to be a rewarding experience in a couple of ways.

Held at the  Japanese American Service Committee (JASC)  and produced by  Genesis Theatricals, only a handful of people were anticipated. So, it was quite surprising when some 50 people or so showed up, requiring the organizers to lay out more folding chairs than expected. The reading was even attended by representatives of the Consulate-General of Japan in Chicago and the Japan Information Center.

Even more heartwarming and moving was the appearnce of Chaya Small, who as a young girl was one of the many Jews whose lives were saved by Sugihara. During the talkback afterward with myself and my director, Elayne LeTraunik, Chaya spoke to the gathered crowd about her experiences and her undying gratitude for the man she described as having "done so much, but always shunned  recognition and honor."

I don't do much acting nowadays, with my son Jack taking up most of my spare time. But in many ways, I consider doing this less acting and more serving my community. In the context of World War II, being Japanese usually means you are the enemy (in the case of the war in the Pacific and Asia) or a victim (in the case of Japanese American internees). So I find it both important and valuable to know there was a tale of genuine heroism on the part of a Japanese national during that time period.

And on Tuesday, November 9, I will get two more opportunities to share this story with others.

First, I will be reading a short five-minute excerpt via Skype to a crowd of 200 to 250 people at Miami Dade College-Homestead Campus. It will be part of their Annual Kristallnacht Commemoration in remembrance of the Holocaust, and in addition to students and survivors, the local consul generals of Japan and Germany will be present.


Later on in the evening, there will be a second public reading of the full play at the Ner Tamid Ezra Habonim Egalitarian Minyan synagogue in Northtown.

I'm looking forward to both opportunities to share Sugihara's story with new audiences. I think it is truly profound, moving and unfortunately, largely unknown story. Strangely, this past September, the Japanese government began taking steps for Sugihara to be recognized in Unesco’s Memory of the World Register. So perhaps the timing just happens to be right.

RSVP to Scott Adams at scottbeeadams59@gmail.com
No admission, though donations to a Holocaust survivor charity are welcome.