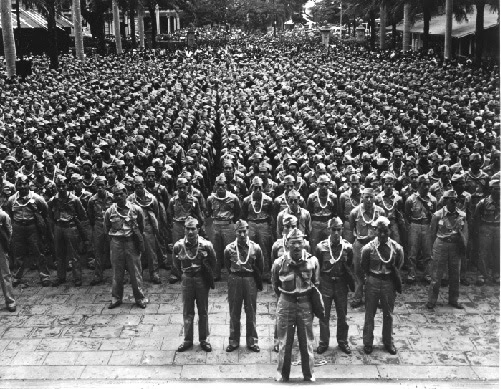 The contribution Japanese Americans made to the war effort during WWII is something that really deserves more mainstream attention. I'm not just saying this as a matter of ethnic pride, though that's certainly part of it (Two of my paternal grandmother's brothers - Haruo "Harry" Kono and Masuo "Mac" Kono - left Hawaii to serve in the 442nd).

Given that there was an undeniable racial dimension to the waging of the war, arguably even more so in the Pacific arena than in Europe (check out John W. Dower's excellent book War Without Mercy to get the full picture), the fact that there were American citizens who shared the names, faces and blood of an enemy of the U.S. yet still volunteered to fight against that enemy in the name of both patriotism and what was right is something that really needs to be hammered into the popular American consciousness. Particularly today, when, as of writing, the world is reeling from the Brussels terrorist attacks and cynical opportunists like presidential candidates Ted Cruz and Donald Trump have renewed calls for institutionalized discrimination and surveillance of Muslim Americans.

I realize those two gentlemen and their followers represent some of the least complicated thinkers on the planet, but that doesn't mean it isn't important for the rest of us to repeat, reiterate and re-teach the complicated reality that there is no simple, one-to-one correspondence between a particular race or religion and the capacity to do harm to our country. And to add, that there are always people many Americans don't think of as true countrymen who would lay down their lives to protect these shores.

In my dreams, there would be a plethora of mass media works chronicling the story of the 442nd Infantry Regiment, the 100th Infantry Battalion, the Japanese American Military Intelligence Service (MIS) and others, ranging from big-budget Hollywood epics along the lines of Glory and miniseries like Band of Brothers to heavily promoted Ken Burns-style PBS documentaries (or even a Making a Murderer like series on Netflix). Right now, unfortunately, that isn't the case, and based on the recent #OscarsSoWhite controversy, I'm not holding my breath until they get made.

Until that time, however, there's still some good news on the horizon. The Go For Broke National Education Center* in Los Angeles is opening a new exhibition in Little Tokyo on May 28, 2016. Titled Defining Courage, it will include interactive audio and video exhibits based on years of recording the oral histories of Japanese American veterans.

I first found out about the exhibition was I was put in touch with the folks at Quatrefoil, the company working with the Go For Broke National Education Center to put everything together. Quatrefoil was looking for people to make audio recordings based on transcribed interviews. Bob Kumaki, who is active in the local Chicago Japanese American community, knew I had worked as an actor, and gave me their contact info.

Ultimately, I ended up making about a dozen or so recordings, telling the stories of Japanese American WWII vets in their own words. Some were from the mainland, while more than a few were from Hawaii (for which I had to try out my best imitation pidgin accent). Exactly how many will end up part of the final product is unknown, but Quatrefoil kindly provided me with a handful of final edits and said it was okay to share them here.

This project was definitely a joy to work on, and I'm grateful to the folks at Quatrefoil and the center for bringing me aboard, even if by long-distance (I made the recordings in my apartment in Chicago and e-mailed to LA). I can't make the grand opening on May 28, but I encourage as many people as possible to attend. And keep your ears open, you may hear a familiar voice.