Helping Out an Old Friend

Kel tossing me around sometime in 2008 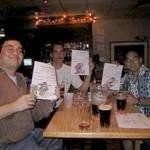 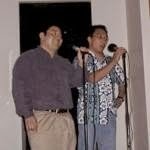 Memories from Aikido Summer Camp in the Rockies, sometime in the late 1990s

Let me tell you about my old friend Kel.

Now Kel (full name Kelvin Kakazu) is not my best friend, maybe not even in my closest circle of friends, depending on how you define that. Aside from a few superficial similarities (we're both Asian, we're both half-Japanese, we both like Camus), we're quite different people.

In our younger days, he was the bane of my comparatively staid, common-sense impulses. A man capable of high-endurance hard drinking and hard eating, frequently goading me into staying out way later than a young would-be professional ought to during the working week. I remember the time we both accepted a challenge to eat some legendary Philly cheese steaks as large as human infants and ended up lying on our backs staring deliriously at the ceiling ("I can see through time!" Kel cried out in anguish). I remember the time we ended up together at Tai's til 4 in Wrigleyville, and . . . Wait, no, I actually don't remember anything about that night (hmmmm).

Kel was (and is) a mixture of various clashing traits and eccentricities. A dyed-in-the-wool liberal with a love of literature and old-school philosophers (Thomas Hobbes, Nietzsche, etc.) who is also fond of handguns and owns everal (maybe many). A couple of years younger than me, but possessed of tastes of man senior to me by decades: Frank Sinatra, cigars, scotch, wearing sport coats and jackets even when not required. One of the most literate fellow I know, who can also generate immature politically incorrect jokes so transgressive they would probably cause a nun's head to spontaneously explode.

But Kel and I have an odd little bond that's just between the two of us. It stems from our days training in aikido at the Chicago Aikikai, back when it was in Lakeview on Lincoln Avenue under the late Kevin Choate.

See, despite aikido being a Japanese martial art and both Kel and I being part Japanese (he being half Chinese and me being half Korean), we weren't particularly good at the start of those days. I had a slight advantage, having done two years prior to joining the Aikikai. But neither of us were the naturally athletic type. Though we didn't know each other as children, we were both the type more likely to be found hiding in the library than on the playground at recess. We were, to most appearance, the type of aikido students not expected to last.

But then something happened.

I'm not sure exactly what it was, or when it was, but at some point, we both went a little, well nuts. We became a bit obsessed about getting good at this thing called aikido. It's not like we planned it or discussed it with one another, but gradually two days of training a week because three, then three became four, then four became five.

And when a somewhat notorious episode occurred, when Choate Sensei instituted some special intensive conditioning classes allegedly because of something I supposedly blurted out impulsively, Kel and I made a pact to attend each and every one (The "honorable" thing to do, we thought). And if I recall, the only reason Kel missed one was because he became sick (following a session when he continued training despite feeling ill).

Now, as one would naturally expect, all this obsessive training did lead to a jump in our abilities. And we found ourselves testing our way up the ranks, attending seminars, getting to meet all sorts of noted instructors in the aikido world.

I was pretty happy with what I was starting to accomplish physically, but all that time, I was also impressed by one particular aspect of Mr. Kel. You see, Kel was a pretty big guy (see the photo above). But when required to take a breakfall, roll or high fall, he positively flew through the air. During that period of craziness, he worked himself up to the point that he could really move.

However, like all cool things, this time eventually did pass. Today, I still practice aikido with the Chicago Aikido Club at the Japanese American Service Committee, but Kelvin hung up the angry white pajamas and followed a long-sought goal of going to law school (at Northern Illinois University). We've never stopped staying in touch and have lots of mutual friends, but the days of crazy training and crazy post-training drinks late into the night are a thing of the past.

Flashforward to the summer of 2013.

Kelvin messages me through Facebook, which has become our regular form of communication. Usually it's nothing much. Trading some jokes, comments on current events, etc.

But this time it's different. This time he's contacting me from a hospital.

He had already made a couple of earlier trips due to indeterminate pain. But this time the doctors had found something. Growths, coin-shaped, appearing in X-rays, on his spine. Surgery required. Absolutely no question about it.

I drove out to DeKalb to pay Kel a visit. We hadn't seen each other much in person for a while. I had done some crazy things like go off and get married and stuff like that. In the hospital, Kel told me the situation he was facing. Doctors told him that there was a 10% chance he would become paralyzed after the surgery.

For the rest of his life.

Geez, I thought. I couldn't believe it. I used to see this big guy charging across the mat like a mad bull or flipping through the air with the speed of a much smaller person.

But there it was. Inescapable, irrefutable reality staring him in the face.

The operation was successful, but Kel is now paralyzed from the mid-chest down, and despite the best of efforts, the paralysis appears irreversible.

Luckily, he resumed his law school studies and has proven to be quite the tenacious character. Our Facebook conversations resumed, and now he is a model for me in many ways. Nothing quite makes me feel like any problems I'm having on a given day are petty and insignificant than getting one of his cheery messages (occasionally accompanied by a dirty joke - some things never change).

Anyway, Mr. Kelvin Kakazu is now seeking help to raise funds for a new wheelchair, and I'm all too happy to help. If you're interested in giving, please follow this link.

Kel has informed me that he was very touched by my post, but there were a few inaccuracies. First of all, I had originally written that the cysts he had were life-threatening, but they actually were not (Seemed to have remembered my worst-case fears instead of the facts). Also, he reminded that those cheesesteaks were from Susie's Drive-In (4126 West Montrose Avenue, if you're interested).

Thought I'd give folks a glimpse of Kel in his prime by posting this video from my shodan (first degree black belt) test from 1999. Kelvin pops up as my uke (attacker/partner) during randori (three-man attack) at 6:42 and jo-dori (staff take-away) at 8:34. Enjoy.