Countdown to Halloween 2014:
1. Teeny-Tiny and the Witch Woman 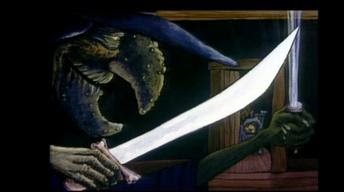 This year will mark the first Halloween for my son Jack who was born in July. Having been fond of tales of the macabre, ghosts and monsters from an early age (which I blame on catching Son of Svenghoolie's Halloween Draculathon on WFLD Channel 32 in 1979 and my subsequent discovery of the Crestwood House Monster Series of books at the River Forest Library), I thought I'd look back on some of the films, books and TV shows that fed my childhood nightmares.

To keep things interesting, I'm going to skip the more obvious choices like The Exorcist or The Shining, and all those other Hollywood horror films kids growing up in the late 70s/early 80s dared each other to watch on VHS or cable in their parents' basements or at sleepovers. I'm going to reach back into my memories for some less well-known works whose stories and images have lingered with me to this day.

First up is the short film Teeny-Tiny and the Witch Woman. I saw this sometime between ages six and nine at Lincoln Elementary School in River Forest as one of those films teachers would sometimes screen for kids in class, or that you'd watch in the school auditorium when bad weather prevented playing outdoors during recess. I think they were all made available to schools by the Scholastic Corporation.

The story is about three brothers who wander into the woods one day an encounter an old lady who is actually the "Witch Woman" of the title, who eats little children and has a fence around her house made from their leftover bones. While the two oldest brothers remain clueless as to the peril they face, the youngest brother (Teeny-Tiny) realizes something is amiss, and manages to outsmart the Witch-Woman and devise an escape for all three using some magical items he pilfered from her house.

I remember being creeped out by the film's narration, which was done by an actress either possessing or affecting a terrific foreboding old crone voice, and even as a child feeling like I was watching a nightmare. I couldn't put my finger on it back then, but rewatching the movie as an adult I notice marvelous things were done with limited resources. The action is crude and static, but the animators seemed to have realized exactly when and what should be moving or unmoving to deliver maximum impact. When Teeny-Tiny and his brothers walk through the woods, the trees and their shadows stand stock still, looming over them with vague hints of human faces and bony fingers outstretched. In the great tradition of old horror films, the Witch-Woman is introduced by a creaking door and then a single green inhuman hand beckoning with a clawlike finger. And the scene where Teeny-Tiny catches the Witch-Woman sharpening her kitchen knives (at 7:16 in the Youtube link above) is a perfect moment of storybook terror. There's also simple but great design work with extreme angles and exaggerated shapes that accentuates everything (I wonder if Tim Burton saw this film, because it's very evocative of his now familiar style).

So, if you've never seen Teeny-Tiny and the Witch Woman and are looking for something to give the kids a scare (though a tolerable scare), check it out (A link to the complete film is below).