Countdown to Halloween 2014:
4. Five Million Years to Earth (1967)
(original title Quatermass and the Pit)
Previously: 1. Teeny-Tiny and the Witch Woman, 2. Masque of the Red Death, 3. Children of the Stones 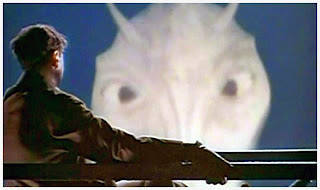 This is the best film in my modest little Halloween retrospective.

I hold Five Million Years to Earth in such high regard that I have been pushing and recommending it since high school.

This film is as important to me as Star Wars, Back to the Future, Raiders of the Lost Ark, or any of the other films I saw as a child during the 1980s that spawned my love of science fiction, fantasy and horror fiction. This despite the fact that I first saw it on TV with commercials almost twenty years after it was made (and have yet to see it uncut and on the big screen), and it had special effects that even as a child I knew were crude and old-fashioned.

I even remember where and when I saw it: Sitting in the living room of my family house in River Forest around '85 or '86 on SuperStation WTBS TV Atlanta via Cablevision of Chicago. I was initially drawn in by the title, which made me think of Ray Harryhausen's giant monster movie 20 Million Miles to Earth  (I loved old Harryhausen films), and ended up being sucked into a very different cinematic experience.

The film begins with an incredible discovery: Construction on the London Underground uncovers a collection of fossils of early man. Scientists led by Dr. Matthew Roney (James Donald, best known for roles in Bridge Over the River Kwai and The Great Escape) establish a dig site and begin work. However, they run into another unexpected find: A giant metallic object of unknown origin. Officials assume it's an unexploded German bomb from World War II that buried itself into the ground upon impact (a not uncommon occurrence), so they contact the military to send a disposal team. However, the object proves to be a puzzle. Though apparently made of metal, it presents absolutely no magnetic properties. It also resists all attempts to mechanically pry it open.

Handling of the situation is passed upward to the Colonel Breen (played by Julian Glover, a British character actor with a huge list of genre film credits including the Bond villain in For Your Eyes Only, the AT-AT commander in The Empire Strikes Back, and a corrupt businessman in Indiana Jones and the Last Crusade. He's currently playing Grand Maester Pycelle on Game of Thrones). At the time he is called, Breen is having disagreements with Professor Bernard Quatermass (Andrew Keir), an eccentric and idealist rocket scientist, over the direction of Britain's (fictional) space program. By happenstance, Quatermass ends up accompanying Breen on his initial survey of the dig site, and that's when stuff gets really interesting.

Once dug out, the object does resemble a projectile, but not one of any earthly origin. And it's completely smooth, unscathed and free of any signs of rust or aging. Breen is nonplussed, but Quatermass is intrigued when he finds out from Roney that the soil around the object is the same as the fossils, dating back five million years.

Colonel Breen examines the thing in the pit

More and more mysteries come to light. An accessible inner chamber is found in the object with markings on a wall that Quatermass recognizes as a symbol from pagan magic. Investigating the neighborhood with Roney's assistant Barbara Judd (Barbara Shelley, a 60s era scream queen), Quatermass finds that it has a history of hauntings and supernatural reports dating back to the Middle Ages. In fact, the neighborhood is called Hobbs End, and Barbara points out that "Hob" is an old name for the Devil.

As the dig progresses, strange things happen. A soldier panics, insisting that he has witnessed a hideous dwarf-like being materialize through a wall. An attempt to drill into the object sets off an odd unsettling vibration that reverberates through the entire dig site. And then a workman is chased from the site and through the neighborhood by unseen forces that churn up violent winds and send objects flying.

Then suddenly, inexplicably and without warning, the inner chamber opens up and reveals the long-dead remains of large insectoid beings. Quatermass and Roney note that with their crouching shape and horned heads, they vaguely resemble church gargoyles or even horned demons. 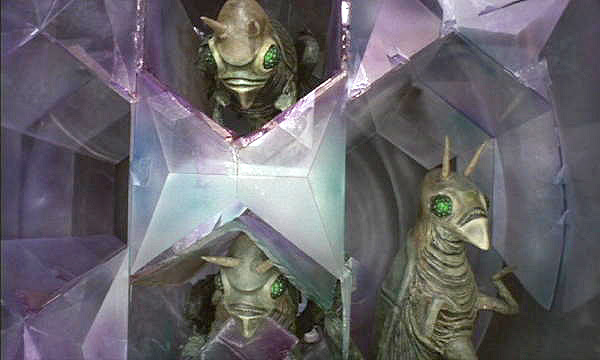 Quatermass, Roney and Judd continue their investigation, now examining the insect bodies, and Quatermass hits upon an astounding theory: perhaps the strange occurrences, the ship, the fossils and the neighborhood's history of hauntings are all connected. The ship is the only remaining evidence of an alien race; a race that came to Earth five million years ago. And based on physical anomalies in the fossil remains, Quatermass theorizes that perhaps this race experimented on our ape ancestors. Maybe, we in fact owe our very human condition to their experimentation (!). And maybe more than that. Maybe our image of the devil and beliefs in the supernatural have been inherited from them as well.

Breen of course is skeptical, and most of the military and government officials share his view. But Quatermass is deeply troubled. The fact that odd physical disturbances have occurred again since unearthing the object indicates to him that maybe not everything is dead as it seems, and may have serious consequences for all those concerned, to say nothing of the human race.

Five Million Years to Earth is an incredibly ambitious film idea-wise. At the start it feels like it's going to be a straightforward mystery with scientific elements, and at the end turns into a mind-blowing blend of science fiction and supernatural horror, attributing both our evolutionary development as a species and all of our superstitions to extraterrestrial intervention. It's everything Prometheus tried to be, absent stupid characters and gratuitous gore.  And it's very appealing if you're a fan of H.P. Lovecraft, in terms of the cosmic and ancient nature of the terrors the characters are forced to confront.

It's also a surprisingly unknown film in the U.S. outside of die-hard science fiction and horror film aficionados. At least in my personal encounters, I tend to meet more people who don't know about it than those who do. This despite the fact that everything I've read up on the film indicate that it's considered extremely important and influential. It's cited by Stephen King as one of the inspirations for The Tommyknockers. Director John Carpenter is a big fan, similarly blending science and the magic in Halloween III: Season of the Witch (the original screenplay of which was written by Quatermass author Nigel Kneale) and Prince of Darkness (which Carpenter wrote but is credited under the pseudonym "Martin Quatermass"). Carpenter also used the name "Hobb's End" for the setting of his film In the Mouth of Madness.

In the U.K. Quatermass is a big deal. I first learned about this in high school when I picked up a copy of Files Magazine Spotlight on Doctor Who Season One by John Peel at Rick's One Stop Comics in Oak Park. Reading about the origins of Doctor Who, I discovered that Five Million Years to Earth was not a standalone work. It was actually a remake of an older 1950s black & white BBC serial, which itself was a sequel to two previous Quatermass serials (The Quatermass Experiment and Quatermass II). I learned more details on the serials from Bill Warren's great book Keep Watching the Skies! American Science Fiction Movies of the Fifties. Each one featured the character of Bernard Quatermass dealing with extraterrestrial horrors, relying only on his wits, intelligence and fierce determination. As with Five Million Years to Earth, the other two serials were also adapted into movies by the British company Hammer Films, which were subsequently re-titled for U.S. release (The Quatermass Xperiment a.k.a. The Creeping Unknown and Quatermass 2 a.k.a. Enemy from Space). 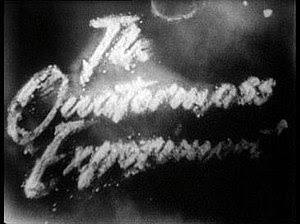 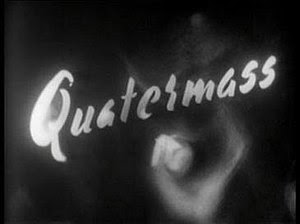 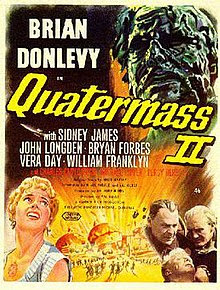 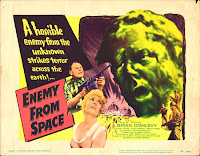 The Quatermass serials were one of the major inspirations for Doctor Who (although Kneale himself, despite being courted to write for the show, apparently hated it). There's definitely a spiritual connection between the tough, uncompromising, scientifically-minded and heroic Professor Quatermass and the crusading Time Lord. The mostly earthbound era of third Doctor Jon Pertwee mined the original Quatermass serials heavily for ideas (one serial "The Daemons" blatantly ripped off most of the major concepts from Five Million Years to Earth). The show has also paid homage several times over the years. The 1988 serial "Remembrance of the Daleks," set in 1963, name-checked a British rocket scientist named "Bernard," and in the 2009 special  "Planet of the Dead"  a scientist refers to "Bernard" and "Quatermass" as made-up units of measurements. More recently, the 2013 episode "Hide" places a heavy emphasis on mixing science and the occult, and it's writer Neil Cross has explicitly stated that he was inspired by Quatermass, and in fact, had tried to include the character, but the rights could not be obtained (There is, however, a similar character in the finished script).

And Quatermass itself didn't die out after those three serials and three films. A final mini-series written by Kneale simply titled Quatermass and re-edited for theatrical release as The Quatermass Conclusion was made in 1979. I saw it on a VHS rental in 1991, and from what I recall, despite some really interesting ideas, it's a bit of a let-down after the far-reaching nature of  Five Million Years to Earth's plot. Also, despite coming out much later than the earlier serials and films, it's effects and production feel even chintzier and dated to me.


And just to show you how much the character has stood the test of time in its home country, in 2005 the BBC mounted a new version of the original serial The Quatermass Experiment. As an homage to the original production, this one was broadcast live just like the first three serials in the '50s. However, instead of breaking the story into multiple episodes, it was done as a single one-night TV movie. It also featured an all-star cast including Jason Flemying as Quatermass and Mark Gatiss (co-creator and co-star of Sherlock) and David Tennant in supporting roles (Bit of trivia, Tennant was informed that he had been cast in Doctor Who during the shoot).

In any case, I recommended Five Million Years to Earth/Quatermass and the Pit more than twenty years ago when I first saw it, and I still recommend it today. It's one of the most intelligent combinations of science fiction and supernatural horror ever made and has stood the test of time.

UPDATE
Found an old posting at Cinemassacre with a great video overview of the original three Quatermass films.