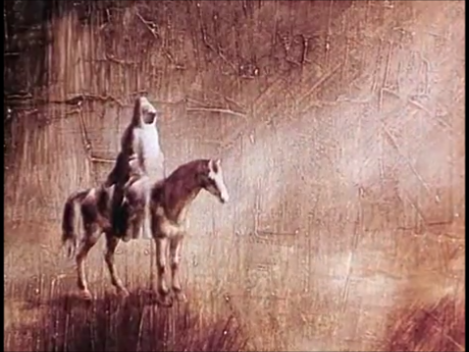 "THE "Red Death" had long devastated the country. No pestilence had ever been so fatal, or so hideous. Blood was its Avatar and its seal --the redness and the horror of blood." - The Masque of the Red Death, Edgar Allen Poe (1842)

Edgar Allen Poe's short story The Masque of the Red Death (1842) is pretty creepy on its own terms. Its gloomy Gothic setting within a Medieval castle while a deadly plague ravages the countryside outside is dripping with atmosphere and death, topped by the haunting image of a cloaked figure that turns out to be the plague incarnate.

My first encounter with the tale was a glimpse of Lon Cheney dressed as the Red Death in the masked ball sequence from the silent classic The Phantom of the Opera (1925). I didn't see the actual film until catching it on the Arts & Entertainment Network when in high school, but a still of the scene showed up in one of the many movie monster books I used to check out of the River Forest Public Library. 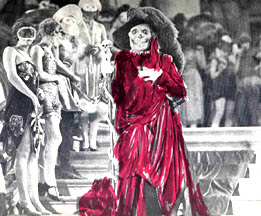 The significance of the name was lost on me, but the red-cloaked, skull-faced image was definitely arresting. Later when I was eight, the horror film program Son of Svengoolie on WFLD Channel 32 in Chicago showed Roger Corman's 1964 film version of Masque of the Red Death starring Vincent Price. Although it follows the general contours of Poe's original narrative, it added a lot of character, plot and dialogue to fill up a feature length running time. However, despite these alterations, Corman's film is a pretty solid horror film in its own right. I'm not the biggest fan of the Corman/Price Poe collaborations, but to me Masque is exceptional. A big part is the cinematography (by Nicholas Roeg, who himself later became a noted director, helming The Man Who Fell to Earth (1976) and The Witches (1990) among others), which makes some startling use of color. Usually with older horror films, I find it's the black & white ones which have best retained the ability to scare over the years, as the color quality is sometimes too garish or highlights flaws in special effects. But the color in Masque is evocative and jarring, helping to set the mood or shock the senses.  I remember even the end credits creeping me out as a child.


That brings us to what I feel is the single best film adaptation of Poe's story: the 1969 animated short by the Croatian company Zagreb Film, MASKA CRVENE SMRTI. I first saw this when my English teacher Mr. Millet showed it to my class at Roosevelt Junior High and it's stuck with me ever since.

Like Teeny-Tiny and the Witch Woman, this version of Masque of the Red Death uses limited animation in extremely effective ways. In this case, the style recalls Renaissance paintings, though includes elements of horror that remind me of Francis Bacon. 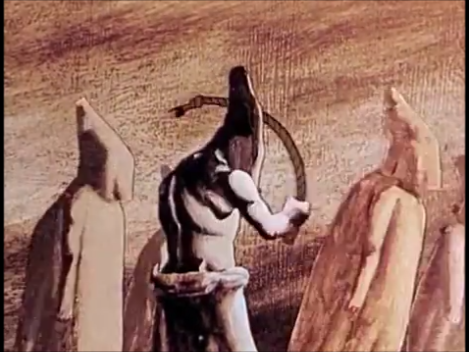 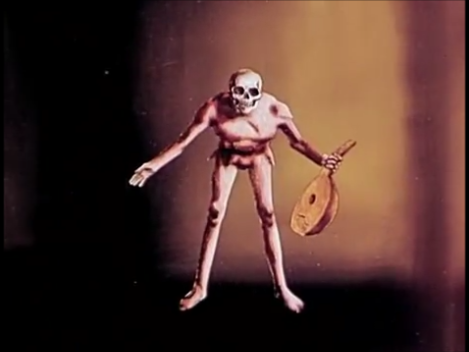 There's no dialogue to speak of. Not much music except for a tune sung by a troubadour at a party (which climaxes in a black joke on the part of the singer). Just creepy, unsettling sound effects which include the screams of those succumbing to the deadly plague.

Everything witnessed onscreen follows Poe's original story pretty faithfully. One interesting deviation is the moment from the original story when the prince whose castle is serving as a refuge from the plague for the wealthy and privileged chases down an uninvited guest appearing at a masked ball. In this film version, the guest is changed into a seductive woman who leads the prince through various rooms until revealing her true identity. 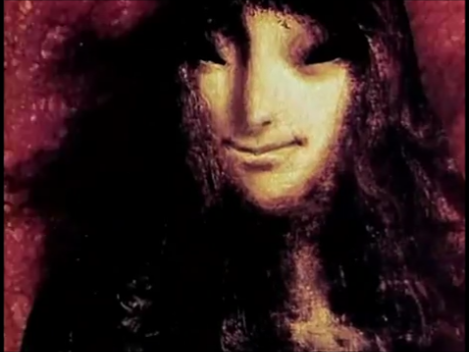 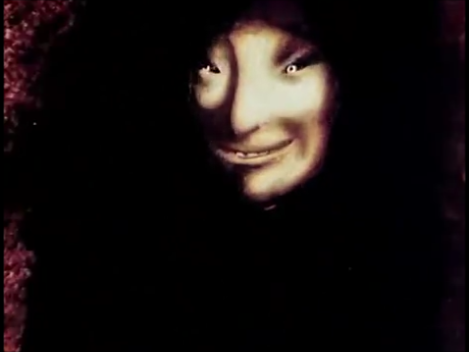 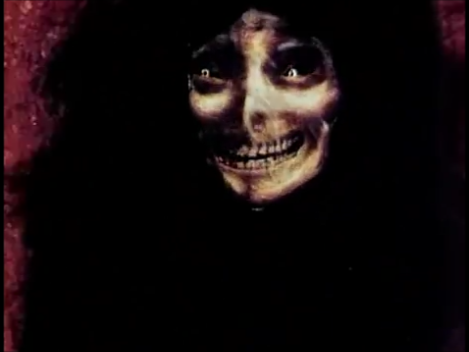 If you're at a loss for some perfectly-themed Halloween scares for the kiddies, I think this should fit the bill. Enjoy.