The stone circle at the Avebury Unesco World Heritage Site, the inspiration for The Children of the Stones.
Photo: Heathcliff O'Malley

Today cable TV is the go-to place for original programming, but back in the early days its networks were still wanting for content.  Children's channel Nickelodeon was no different. While it did have a slate of homegrown shows, Nickelodeon also filled out its early 80's schedule with imports like the Canadian sketch comedies You Can't Do That On Television and Turkey Television and the British science fiction drama The Tomorrow People (which recently resurfaced as a short-lived US remake on the CW).

One show that sticks out in memory is The Third Eye, which actually was a compilation of four different serials from the UK and New Zealand (Into the Labyrinth, The Haunting of Cassie Palmer, Children of the Stones, and Under the Mountain). While most of Nickelodeon's programming was geared towards comedic or educational shows, with a few family-friendly action adventures, all of the stories shown on the Third Eye were dark and menacing, and with the exception of Under the Mountain, tales of the supernatural.

Each episode was preceded by this Rod Serling-ish opening.

By far the scariest and most memorable of the serials for me was Children of the Stones. So much so, I sought it out as an adult and watched all seven episodes on Youtube not long ago. And though its flat videotaped images and low-budget special effects (on par with old Doctor Who) have blunted its ability to frighten me now, it's certainly strong enough in the writing and acting departments that I can still see how it was the stuff of nightmares for my younger self.

Opening titles to Children of the Stones

Although Nickelodeon aired Stones during the 1980s, it was actually made in 1976  by British network HTV. The story follows an astrophysicist named Adam Brake (played by Gareth Thomas, better known to genre fans as the star of Blakes 7) who travels to the small rural village of Milbury with his teenage son Matthew. The entire town is built in the midst of a circle of stone megaliths similar to Stonehenge, which Brake and Matthew begin to investigate. 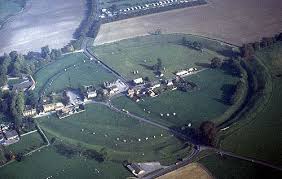 The village of Milbury and the stone circle, seen from above.

The arrangement of the stones is unusual, with no clear purpose, and they also seem to exert a sinister influence. This becomes obvious when Brake touches one of the stones and apparently receives a kind of psychic shock (seeing and hearing screaming faces and voices).


Matthew also begins noticing strange shifts in behavior among the townsfolk: people acting normal one day then unusually happy and joyful the next with no explanation (Repeatedly saying, "Happy Day."). In addition (in the grand tradition of Stephen King), he discovers that he is psychic, giving him special insight into the strange goings-on in Milbury. Awaking one night from a dream (or is it a vision?), he hears strange voices in the dark and follows them, finding a group of villagers engaged in some kind of ritual.

Only two people in the village apparently know what's really going on. One is a superstitious and slightly demented local poacher named Dai (played with bug-eyed conviction by the great British character actor Freddie Jones, who seems to have specialized in delivering eccentric performances in films such as The Elephant Man, Dune and Young Sherlock Holmes), who eventually dies under mysterious circumstances when one of the stones falls onto him (despite being rooted in centuries-old earth). The other is the village's leader, a wealthy landowner and astronomer named Rafael Hendrick, whose cryptic words and actions hint that maybe he's at the center of everything.

There's also an old painting purchased by Matthew on a whim (or premonition) before coming to the village. It depicts a stone circle resembling Milbury with people dancing in a ring within it as part of some pagan rite. Curiously, there's a bright shaft of light emanating from the ground in the center of the ring of people reaching into the sky. The painting also includes a sinister serpent and what appears to be other people either trapped within or turning into stone. 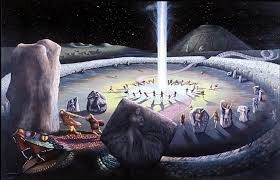 This totally spooked me as a child

As stranger and stranger events unfold and more of the townfolk turn into the "Happy Ones," Brake and Matthew attempt to depart Milbury. Unfortunately, they discover that, like the Hotel California, you can check-out any time you like, but you can never leave.

There's a number of things about Children of the Stones that make it a standout. First of all, despite the crude production values, there's a great sense of atmosphere. Just as Patrick McGoohan's science fiction series The Prisoner filmed in the Village of Portmeiron in Wales and used that town's unusual architecture to create a surreal environment on a budget, Stones makes maximum use of its location, the village of Avebury in Wiltshire, and the actual stone megaliths dotting the landscape. The mysterious and ancient stones, towering over the characters, and standing here and there in fields and next to houses and buildings, feel like characters unto themselves (as a child I swore I could make out creepy faces), and create the sensation of an alien presence lurking about and watching. Coupled with the rural environment, odd behavior from villagers and hints of paganism, the whole serial feel like an unsettling PG-rated version of The Wicker Man.

Secondly, the script, acting and direction all approach the story with dead seriousness. There's absolutely none of the campiness or reassuring comic relief of new or old Doctor Who.  Each new piece of plot information is introduced intelligently and understandably, which is especially important when things take an incredibly fantastic turn. I don't want to give away too much of the plot in this mere blog post, but suffice to say the eventual revelation of what the stones are and their connection to the village is an incredibly ambitious blend of science fiction and supernatural concepts involving psychic powers, cosmic energy, and reality-bending causality loops.

I'm not sure if kids (or adults) today would enjoy Children of the Stones the same as when it was originally made. It might just look too chintzy for modern tastes, and some of its dramatic devices (like the chorus of moaning voices on the soundtrack) might feel hokey instead of spooky.

But if you're curious, the entire thing is up on Youtube to view or may be purchased on Amazon. My personal viewing recommendation: Watch it on your TV, but first close the shades, turn down the lights and put yourself into the mindset of a 10-year-old child.